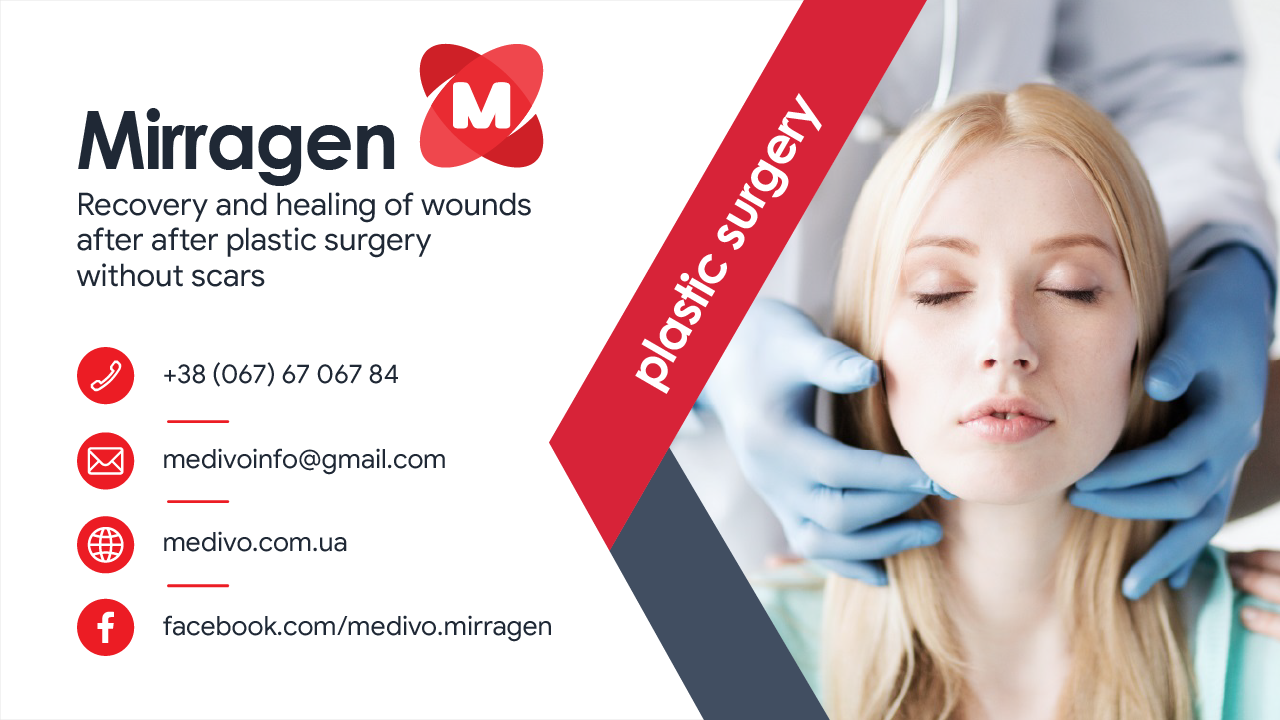 The principles of plastic surgery are based on the elimination of various aesthetic problems. Plastic is made with the purpose of improvement of appearance, smoothing of wrinkles, removal of any defects. Even plastic in its poor quality can be left unattractive scars.

Not only does Mirragen accelerate the healing process of the sutures, it also significantly reduces the likelihood of colloid scar formation. If scars remain, they look like thin strips along the hairline, behind the ears, or hidden in the natural folds of the body.

Mirragen is made on the basis of the fiberglass bio-compatible with human tissues, which absorbs excess moisture and dissolves in the fluid of the wound canal. The matrix fibers serve as the basis for the growth of new soft tissues. This creates a fibrin clot that stimulates the chain reaction of wound healing. The clot is formed by the capture of platelets, growth factors, and other components that promote healing.

Upon contact of Mirragen fibers with wound fluids, a large amount of ions is released, which has a good effect on natural regenerative processes at the cell level. Namely:

Mirragen removes excess moisture from the wound that fills the matrix and fills the entire surface of the wound canal.

Mirragen by itself does not heal wounds - it actively influences the immune system and regenerative abilities of the human body. In addition, the remedy is an excellent antiseptic that prevents the infection from penetrating and developing in the wound.

In cosmetic and plastic surgery suppression of suppuration is one of the first places. If one of the stitches is affected by the infection, even with careful treatment of the wound and after a course of antibiotics, the cosmetic suture will turn into an obvious scar instead of an imperceptible strip, which is unacceptable.

Plastic surgery is sometimes used to remove rough scars and colloidal scars. The course of the operation is to excise the skin and connective tissues. After that, a cosmetic continuous seam is applied with a special thin thread. Continuous suturing is performed not on the skin surface, but in the subcutaneous space and without the formation of nodules. To keep the seam apart, small nodules are formed only at the beginning of the suture, the other end of the thread is fixed at the other end of the wound canal.

After the cosmetic surgery, the soft tissues and the skin of the face are very swollen, and within a few days after the surgery the sutures are still visible, which scares most patients. The use of Mirragen in this case will quickly overcome the swelling, as the matrix absorbs excess fluid from the space of the seams.

Timely replacement of the Mirragen ligaments allows you to quickly deal with the manifestations of the postoperative period of plastic surgery, to reduce the likelihood of infection of the wound, to accelerate the healing of the wound canal after removal of scars.