Wounds on the skin, subcutaneous tissue and underlying muscles are one of the most frequent cases that a surgeon has to deal with in daily practice. Allocate accidental wounds (bites; wounds resulting from an accident, cuts from sharp objects, penetration of bullets, damage by metal objects; thermal and electrical damage) and deliberate, or operating, wounds. Both groups of wounds require knowledge of healing processes for the correct approach to their treatment.

Wound healing is a complex dynamica process that combines the formation of blood elements, extracellular matrix (ECM), parenchymal cells and soluble mediators (cytokines).We can say that the cells of the body (with the exception of the very first in embryogenesis - blastomeres) are surrounded by a substance that supports them in a certain place relative to other cells of the body into a single system called the body, and this is the extracellular matrix.

The first response to tissue damage in the body is hemostasis, which includes 3 stages: (1) vasoconstriction (narrowing of the vessel lumen); (2) thrombus formation;(3) activation of the blood coagulation system with the formation of a fibrin plug (blood clot).Blood and lymph flows out of damaged blood and lymph vessels, filling the wound and cleaning the wound surface. Almost immediately, the blood vessels undergo reflex narrowing and damage to the endothelium, activating platelets with the subsequent formation of a thrombus inside the wound defect. The blood clot protects the wound, dries up to form a scab, and allows the wound healing process underneath.Vasoconstriction lasts only 5-10 minutes and is accompanied by the release of hormones such as catecholamines, serotonin, bradykinin, prostaglandins and histamine to minimize blood loss. This is followed by the process of vasodilation (vasodilation), due to which the intravascular components through the damaged areas of the vessels go into the intercellular spaces. As a result of endothelial damage, tissue thromboplastin, an internal coagulation cascade, is activated, and fibrinogen is converted into an insoluble network of fibrin fibers and constitutes a fibrin plug.In the first 24–48 hours, a preliminary extracellular matrix is formed within the clot. On the 4th-7th day, the preliminary extracellular matrix is converted into a permanent structure and the wound becomes inaccessible to bacteria.

Thus, the fibrin network acts not only as a hemostatic agent, but also as a barrier to infection, prevents fluid loss, is a substrate for wound healing, and stabilizes wound edges.The inflammatory phase is characterized by the migration of leukocytes into the wound within 6 hours after injury. Leukocytes adhere to the vascular endothelium along the edge of the site of inflammation at the wound site. Inflammation begins with the activation of the complement system during injury.

Additional decomposition products attract neutrophils to the wound, which during the first 3 days are the predominant cell type, reaching a maximum in the first 24–48 hours on the way to the fibrin clot.Proteinases released from neutrophils destroy necrotic tissue and attract even more neutrophils, which phagocytose bacteria, damaged cells, extracellular debris and remove them from the wound.

The combination of wound fluid, neutrophils and damaged tissue is included in the wound exudate, the presence of which gives the wound an unhealthy appearance, but in fact it is of paramount importance for wound healing. Exudation does not imply infection. Note that neutrophils are also present in sterile wounds. After 3 days, the neutrophils are replaced by macrophages.

The main functions of macrophages:

Thus, activated macrophages work in the wound environment and play a major role in the transition between the phases of inflammation and recovery. Macrophage growth factors promote the proliferation of new tissue cells, including fibroplasia and angiogenesis. Macrophages also release lactate into the wound environment, which stimulates connective tissue growth and collagen production. Macrophages, fibroblasts and young blood cells migrate into the wound as a single or a single wound module. Polymorphonuclear neutrophils and macrophages perform an important function of rejection of non-viable tissue and wound cleaning, regulated by cytokines and growth factors.The inflammatory phase in experimental wounds lasts approximately 5 days. The classic signs of this phase are redness, swelling, soreness, increased local temperature, and dysfunction. The environment of such wounds is ideal for bacterial infection, and rough handling of these tissues can maintain tissue necrosis with subsequent infection.

The proliferation phase, or recovery phase

This phase is characterized by the proliferation of fibroblasts, endothelial and epithelial cells. Fibroblasts fill the wound and begin to deposit new matrix in the form of collagen and glycosaminoglycans. At the same time, neovascularization begins and granulation tissue is formed.

The key point in the wound healing process is the formation of blood vessels - angiogenesis. Without adequate nutrition, fibroblasts cannot survive in the wound environment, in other words, no fibroblasts - no collagen. Endothelial cells from the parent bed proliferate on the 2nd and 3rd days after injury and serve as the cellular origin of angiogenesis. Capillary bundles grow into the extracellular matrix (ECM), where they pass into the distal branches and join, forming capillary loops, eventually uniting into a capillary network. The growth of capillaries from the surrounding tissues into the wound is 0.4–1 mm / day.

Fibroplasia is the formation of connective tissue in a wound. Fibroblasts arise from viable wound tissues, which are prone to differentiation and are synthesized in the extracellular matrix of the wound, which includes the building blocks of collagen, proteoglycans and glycoproteins. The fibroblast population begins to increase on the 3-5th day after the injury and reaches a peak of activity on the 7th day (ie, most wounds with dehiscence, heal on the 3-5th day after surgery). From about the 4th day of a simple injury, young granulation tissue begins to form, which plays a major role in scarring.

This tissue is called granulation because it is located on the surface of the wound and has a granular (granular) appearance. It is characterized by the proliferation of newly formed small blood vessels and fibroblasts. The multiple bends of small vessels macroscopically create the impression of grayish grains (granules) (Fig. 1). The newly formed vessels have permeable interendothelial contacts, allowing the release of proteins and erythrocytes from the vascular bed, therefore, the granulation tissue is often edematous. It is a very fragile tissue, but important because of its function as a barrier to infection.To accelerate this phase of wound healing, an innovative product Mirragen has been developed, which is a biologically active borate glass fiber. It serves as a matrix of fibers and beads based on boron and other inorganic trace elements.

The formation of a healthy bed of granulation tissue serves not only as a barrier to external contamination, but also as a scaffold for migrating epithelial cells. Collagen is directly responsible for the strength of the connection of the edges of the wound. Lack of collagen or improper formation of collagen can lead to a gaping wound. Collagen is the deposition of fibroblasts and associated fibrin filaments.

1–2 days after injury, epithelial cells begin to proliferate in the basal zone and the overlying spiny layer of cells (along the viable border of the skin defect) using pseudopodia. Epithelial cells damage the formed clot in the wound and the stroma secreting proteolytic enzymes (collagenases, plasminogen activators), and try to replace the coating with viable tissue. In the process of migration, epithelial cells can increase in size and "flatten" over the vascular wound bed (Fig. 2).The activity of epithelial cells leads to inhibition of granulation tissue to prevent the formation of excess amounts of this tissue.The total duration of epithelialization can vary from several days to several weeks (depending on the size of the wound and the state of the granulation tissue). 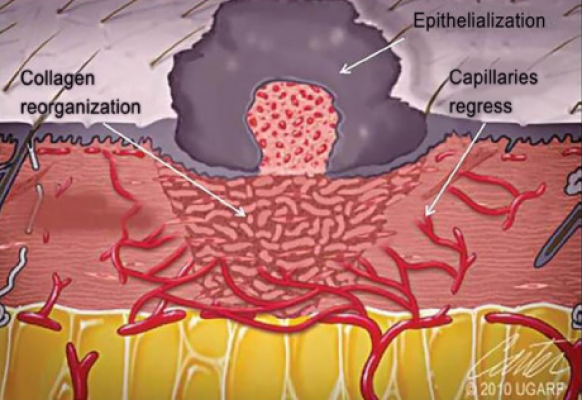 In wounds with minimal dermal rupture, closed with sutures, epithelial cells can form bridges within 48 hours. In wounds with damage to the entire thickness of the tissue, epithelial cells are formed only after the appearance of granulation tissue (on the 4-5th day after injury). In wounds small in width, epithelial migration may last for weeks or may not end with complete wound closure. Thus, the epithelialization process can take a time interval from the proliferation phase to the maturation phase.

Suture wounds may appear to have healed, but premature suture removal can cause dehiscence (without adequate collagen support, the wound below the epidermal surface is not elastic enough).

Tightening the edges of the wound (wound compression)

Wound compression is a process in which peripheral skin with a full-thickness defect, thanks to a centripetal mechanism, gradually closes the wound, spreading towards the center. Compression of the wound encompasses both phases - proliferation and maturation.Starting from 5–9 days after injury, fibroblasts turn into smooth muscle contractile proteins, due to which the edges of the wound are pulled from the periphery to the center. If the contraction of the wound is excessive, contracture of the wound may occur, which is a pathological process leading to a restriction of the mobility of the underlying structures.Interestingly, square and rectangular wounds heal more effectively than circular skin defects. Linear margins contribute to the force of linear contraction of the myofibroblasts.

The transition from extracellular matrix to scar tissue requires connective tissue remodeling. During the transition from granulation tissue to cicatricial maturation, collagen remodeling occurs with a balance between its formation and destruction. Collagen formation is directly related to the tensile strength of the wound edges. So, after 3 weeks after injury, scar tissue is 20% of the final strength. Thereafter, the increase in elasticity occurs at a slower rate. In the next few weeks, the scar reaches only 70–80% of the strength of normal tissue.

At the end of the healing process, there is less collagen tissue (compared to its original content in the wound), but with a better structural configuration.The post-injury maturation and remodeling phase generally lasts approximately 20 days to 1 year. Using the Mirragen product for healing wound surfaces, you can speed up this process by 25-40%.