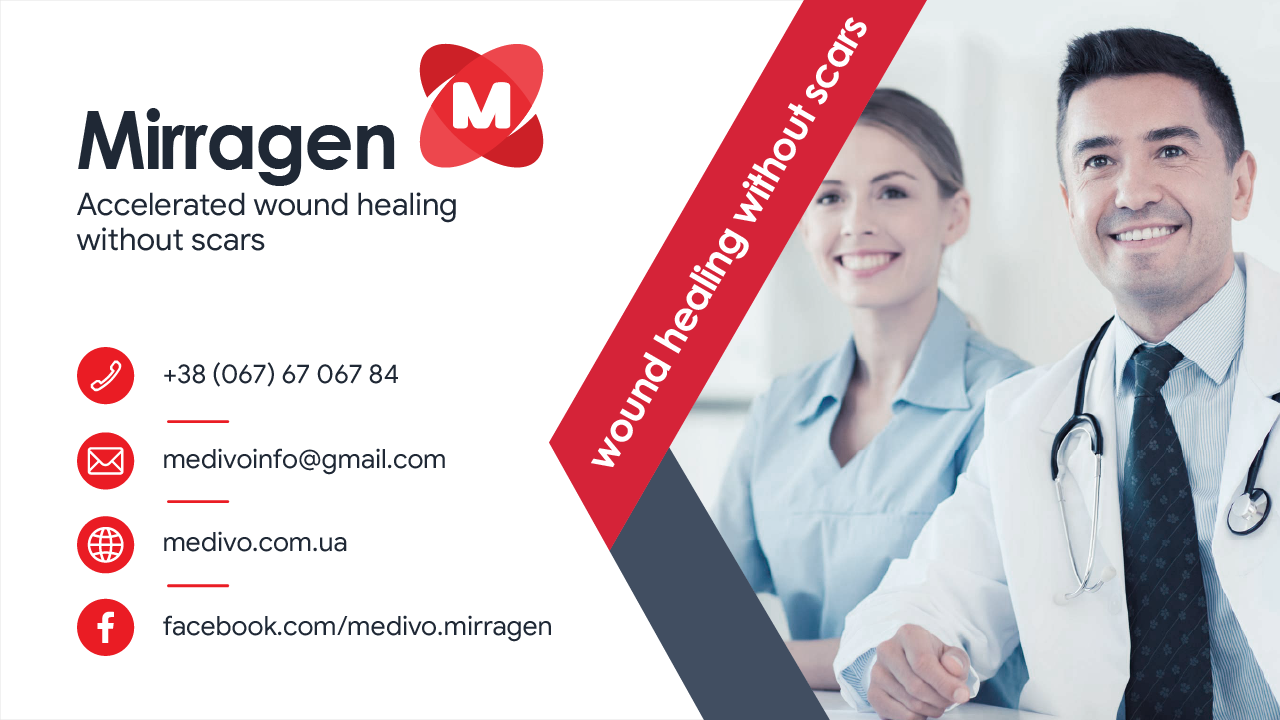 Mirragen is a new approach to the treatment of wounds, both superficial and deep. As a distributor of this product, our company supplies this type of supplies throughout Ukraine.

What is a medical device and what are its features? Mirragen performs two important functions: healing and dressing.

The main properties of the product - speed, efficiency, no side effects. It starts working immediately, directly in the wound, absorbing excess moisture and coping with any infectious agent. It is also an alternative to any scars ointment. Due to its special fiberglass structure and high activity, this dressing material creates conditions from the very beginning that prevent the formation of diseased scarring on the body.

Mirragen is a plastic biomaterial in the form of scraps of fibrous structure in sterile trays. The presented sizes are: 5x5 cm, 10x10 cm, 15x2,5 cm. Its active ingredient is borate fiberglass, which is able to dissolve and carry out in the wound anti-inflammatory, angiogenic and bactericidal action. When dressing, you can trim the edges that extend beyond the skin defect.

Give the material a proper shape by applying directly to the site of damage. The Mirragen must be secured with a secondary bond of ordinary material. Upon contact with the wound surface, the active components immediately take effect. At the same time, not only the mechanisms of healing, but also the processes that prevent the formation of distorting traces are immediately included.

If after the use of even the most effective cream from scars remained visible scars on the face and hands, then Mirragen is able to prevent the formation of these defects in open and sensitive areas of the body.

Warning! This dressing is intended for medical use and is strictly supervised by a healthcare professional.

Features of the product

In the area of ​​the wound surface, mechanisms aimed at repairing lost tissues are included. Mirragen serves as a kind of catalyst for processes. Acting directly at the point of application, it:

Healing undergoes four successive stages: inflammation, proliferation (recovery), maturation (rearrangement). Activates the activity of neutrophils and macrophages that fight bacteria that are trapped in the wound.

The antimicrobial action of our agent enhances the effect. Its absorbent properties help to better cleanse the wound. Proteases and growth factors are concentrated at the site of damage. The Mirragen porous-fiber structure serves as a matrix for the growth of living tissues. There is cell proliferation, more intense angiogenesis. Living tissue gradually replaces the agent, and its structural components are absorbed.

Granulations are formed, elastin and collagen are produced. Excessive production of the latter leads to scarring. Mirragen's material prevents the formation of excess of this component. Due to the action of the active components, the effect of a "fresh" wound is created. Having a special microstructure, it absorbs the products of the wound medium, separating its liquid fraction from the solid components.

In the final healing, the wound surfaces are almost indistinguishable from the surrounding skin. They do not contain keloid, do not protrude above the surface of the skin and have a normal, physiological appearance.

Mirragen - intense action in the wound since its application

Practice has shown that even modern laser correction does not preclude the maintenance of scars. Scarring in beauty salons and medical facilities is also ineffective. All these procedures are performed when the process is complete and the scar is formed.

Mirragen acts in the wound intensively and constantly, since its application. It prevents scar formation and does not remove it.